Cones go on the kids birthday

A bowling party can be organized quickly and provides for mood. 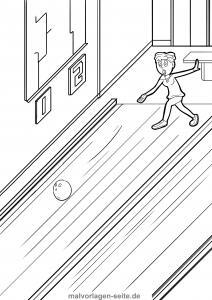 Many restaurants have bowling alleys that can be rented by anyone. Depending on how large the number of children is, the lane should be rented for two to three hours.

When registering, it is advisable to specify the age group of the cone group so that small balls are provided.

Furthermore, should be clarified at the same time, whether chips and sweets may be brought. Drinks usually have to be bought from the provider of the bowling alley. This usually provides, if desired, finger food available.

The bowling with children must not be dogged as seen in sports bowling. Most of our colleagues might never have had a cone in their hand. Thus, bowling games are the most fun. Here are some of the games that can be played during the birthday.

Hangman: This game is known as wordplay. A word is searched and the one who has to guess it gets a gallows stroke for each wrong guess letter. Bowling is about the fallen cones. The first player starts and scores a certain number of pins. The next player has to do more, and so on. If a player fails to reach a higher score, he receives a gallows stroke. The first to hang on the gallows has lost.

Bow house numbers: Here three passes are tapered. Then each child determines the order in which his litters should be written down. Example: In the first throw the player scores an 1, in the second a 6 and in the third a poodle, thus an 0. Now it would be advisable to make house number 610 out of it. Then it will be looked, who has the highest house number gekkegelt. In the modification of this game wins the lowest house number. Here, however, the poodle counts nine points.

Plus, minus, times, shared: A game for schoolchildren who master simple arithmetic tasks. Every child has five litters. The first two litters are pulled together, the third roll is deducted from the sum, the fourth roll is taken and the fifth is used to split the sum. The child with the highest total wins. But it's also fun if the winner wins the lowest total.

In the cup shop medals can be made beforehand or even small trophies. For example, the child who won the most games receives a trophy.

The poodle king, the kid who has thrown the most poodles, gets a little cloth poodle and all the other kids get medals to play with. A nice memory for the home.

Who knows, maybe the cup will be a challenge cup, because the next birthday party will take place on the bowling alley again?