When Ralf takes his son to bed one night and sees him sleep peacefully, he remembers his own childhood and the legendary adventure he once experienced in the garden with his best friend Maximilian. It was an adventure that once welded the two children together.

Short story adventure in the garden

"I have something here that you will love very much," said Maximilian, as he came into the room of Ralf. The two had an appointment to play and Maximilian had a little surprise for Ralf. "What do you have?", Asked Ralf with a certain boredom. "I have come up with my own adventure and I would like to experience it with you." 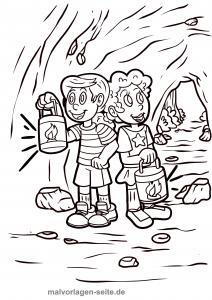 Ralf seemed confused, for he did not know what Maximilian was talking about. "What do you mean by that? You came up with your own adventure? I do not understand you. "Maximilian put down his backpack and searched for something in it. "What are you looking for now?" Ralf asked. "You'll see soon," Maximilian answered with a smile.

"Now I'm curious." Maximilian pulled out a piece of paper. "This is our adventure that we will experience today." Ralf picked up the piece of paper and carefully read what was written on it before he started to laugh.

"Is that your serious?" Asked Ralf. "Clear. Or do you have something else planned for today? "" No, not really. But ... "" Come on. That will be funny. A real adventure. "At first, Ralf was skeptical, because Maximilian had listed on the sheet of paper some things that could be experienced in an adventure. "And how exactly did you imagine this thing?" Ralf understandably knew.

"We play outside in the garden. Of course we will not actually experience this adventure. All we need is our imagination. We have a lot of that, right? "" Yes, yes. But ... "Ralf was still skeptical. "Oh, come on, Ralf. If you suggest a game, I'm always there. "Ralf thought for a moment and then made a decision.

"That's true. You always participate in my game ideas. Now let's try one of your games. Count me in. Let's go to the garden. The sun is shining. So we can experience our adventure outside in the garden. It's much nicer. "" Agreed. "The two of them walked into the garden together. Of course, Maximilian did not forget to take his plan with him.

When they arrived in the large garden, they looked up at the sky and noticed that there was no cloud in the sky. "Ah, the perfect weather to play outside," said Ralf. "That's true. Here in the garden, our adventure will be twice as fun. "" So. What's our plan, Maximilian? "" Okay, I'll tell you the beginning of our adventure and then we'll just invent the rest of the adventure ourselves. "" Sounds good. Then go. I'm curious."

"This is the beginning of our adventure: We wake up exhausted on the edge of a large forest. It is a mystery to us how we came to this place. We have a desire to return home, but we have no idea which direction to go in order to reach our destination. "" That sounds good, Maximilian. "" That's the beginning of our adventure. We can think of the rest now. "" I think we should first try to find out where we are. "Maximilian agreed.

"Best of all, we stay away from this forest, because between these many trees we could get lost very easily. I suggest we go over this clearing. There's a hill over there. We should try to reach the hill. Maybe we can get a better view of the area from up there. "" Do you think so? "Maximilian asked.

"The hill is not very high. I do not think we can look over the treetops from the top of the hill. "" It's worth a try. Or do you have a better idea? "Maximilian shook his head in denial. "Okay, then we'll be on our way. The hill is not far away. "

The two climbed onto the climbing frame in the garden and pretended to be on a hill. "Can you see something?" Ralf asked. "Far and wide only trees. How about you? "" Unfortunately, too. I guess we have no choice but to go through the forest. "

"Looks like it. Let's go in that direction. "Maximilian pointed west. "Agreed," Ralf said. The two left the hill and made their way into the forest, which presented the two children near the flower bed from the garden.

"The trees are very tall. I have never seen so tall trees in my life. "" Me neither. Luckily we do not have to climb up there. I'm terrified of heights, "Ralf admitted. "Wait!" Maximilian suddenly spoke. "What's going on?" "Did not you hear that?" "No, what?" "I'm not sure. But I saw something up there. "" Where exactly? "Ralf asked.

"There in between these two trees." "There are many trees here," Ralf replied. Suddenly Ralf winced. "Now you heard it too, right?" "Yes, indeed. What was that? "" I do not know, "answered Maximilian. "But we should go on quietly. Somebody seems to be on the way here. It is better if we go undetected. Who knows who or what is out there

is. "Ralf swallowed hard. "Do not worry, Maximilian." "I'm sorry. I did not want. Come on, let's move on quickly. But be quiet. "" I'm right behind you. Go ahead. "The two tried to hide behind some bushes. "There was the noise again. It sounded like steps. There has to be one human here. "" That's impossible, Ralf.

According to my information, no people live here. You must be wrong. "" I hope you're right. I would not like to meet other people here. Who knows what they're doing out here in the wilderness? "The two children thought for a while. "I have an idea," Ralf said, picking up a rock he found on the forest floor.

"What are you doing?" Maximilian asked unaware. "Do not worry. Just stay calm. I just want to try something. "Ralf threw the stone to a spot that they could keep a good eye on. "Ah, I understand what you intend to do. Really smart, Ralf. "" Thanks, but that's the wrong time for compliments. Maybe it will not work out. "" We'll see soon, "Maximilian replied.

After a while, some figures appeared at the place where Ralf had thrown the stone. Ralf and Maximilian gasped as they realized what beings they had in front of them. "These are trolls!" Said Maximilian. "Oh no. That is not good at all. We have to leave here as soon as possible. Apparently we are here in their area. Trolls are evil beings.

We should see that we disappear here. "" I agree with you. No way out of here. "As the two got up, the bushes rustled behind which they hid. The rustling made the trolls aware of her. The trolls approached Ralf and Maximilian. "Oh no. They noticed us. We have to run, Ralf! "Cried Maximilian loudly.

The two children ran, but Maximilian fell. Ralf stopped and tried to help Maximilian to his feet. Meanwhile, the group of trolls came closer and closer. "I can not continue. My foot hurts. "The trolls quickly caught up with the children. They gathered in a circle around Ralf and Maximilian. "Oh oh. What do we do now? "Ralf asked. "I have no idea. We are in a bind! "

One of the trolls, the leader of the group, approached. He sniffed Maximilian. Maximilian noticed that the troll had a bad breath. "We are sorry if we have invaded your area. We are just looking for the way home. Do you happen to know the way? "Ralf asked when he noticed how ridiculous his question sounded. "Come in, I brought you an ice cream," the troll answered.

Ralf and Maximilian were very confused. "Did you hear that too?" Ralf asked. "Yes, look over there is your mother. She holds two cups of ice in her hand. "" Well, I think we'll take a short break. The trolls will not run away. "" But when we come back, we have to find a way to run away from the trolls. "The two started to laugh.

Ralf still fondly remembers this little adventure that he had a long time ago with his good friend Maximilian.