The sun had not even risen when the alarm clock on Michael's bedside put an end to the 10 boy's sleep. Still sleepy, Michael reached for his alarm clock to shut off the ringing that interrupted his beautiful dream of a football game in which he was the big star.

Short story First day of school in the new city

Michael often had trouble getting up properly in the morning, because he found it nice to sleep late and stay in his cozy bed. But this was a very special day for Michael, because since his family moved to another city, he now attended school in his new home. 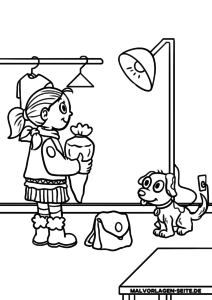 By moving to a new environment, Michael had to leave behind many things that were very close to his heart. He missed his old friends, because Michael was new to the city and he was very afraid that he would not make new friends here. Michael found it difficult to cope with the new situation.

For this reason, he was afraid of the first day of school and the new school. Michael wanted to just lie in his bed, but his mother opened the door to his room and told him that he should now get ready for school, otherwise he would be late. Although Michael would have liked to push himself, he got up and went into the bathroom to get ready for the first day of school.

As Michael made his way to the bus stop, the sun was on the horizon. The bus stop was not far from Michael's home, so he arrived there quickly. At first, Michael was alone at the bus stop. He hoped that it would stay that way until the bus arrived. But after a few minutes, a group of four children of Michael's age came to the station and stopped near Michael. Michael responded by retreating to the corner of the bus stop.

He felt like the other kids were talking about him because they kept looking at him and talking to each other. When one of the boys said something and the other kids suddenly laughed loudly, Michael was sure they made fun of him. In fact, the boy just told the others a joke he had heard a few days ago. Michael did not know this and his uncertainty grew bigger and bigger. He thought the other kids would have fun at his expense.

Michael was shy and had trouble making new friends. Therefore, he found it difficult to leave his old friends to start a new life in this city. He did not dare to address the children. Michael was intimidated, assuming he would not be accepted by the other children in this city. For this reason, Michael decided to hold back first. He did not want to attract attention on his first day at school.

The minutes passed and when the bus finally arrived, Michael was faced with another problem. Almost all seats on the bus were already occupied. Only a few places were still free, but Michael did not have enough courage to sit down to another child. So he just walked past the empty seats until he found two seats in the back of the bus, both of which were still empty.

Michael was confused, because he noticed the other children in the bus staring at him because they did not know him. It was obvious to Michael that he did not feel well. He sat down in one of the seats and put his satchel in the empty seat next to him. He wanted to prevent anyone from sitting down with him. A few rows in front of him sat the boy who had told the joke at the bus stop. He kept looking back at Michael.

Michael noticed this and made himself very small, so that he was barely visible. The bus ride to the school took only a few minutes, but for Michael it felt like the trip took several hours. He was glad that the bus ride was finally over. Now he was standing in front of his new school. Most of the students were about to enter the school through the main entrance. Michael took a deep breath and decided to go to the big school building as well.

Michael's new school was a lot bigger than the school he had visited in his old homeland. At first, Michael had some problems finding the room where his first class took place. But he made it in time to find the room where his new class and his class teacher were already waiting for him.

"So, you have to be Michael. Just come in and close the door behind you, please, "said the friendly teacher in greeting. Michael closed the door and stood next to the teacher after he gestured with a hand gesture that he should come a little closer. "I can introduce you to your new classmates. This is Michael. Michael has just moved here. Please welcome your new classmate. "" Hello, Michael, "the students chorused and Michael trembled all over. He was very nervous, because many eyes were on him.

"There is still a free space in the back. Please sit down there, please, "said the teacher, pointing to the open space. Michael could not believe his eyes, because at the same table he was supposed to sit on sat the boy Michael had already seen at the bus stop and on the bus. Michael sat down and noticed the boy watching him out of the corner of his eye. The teacher started to write something on the blackboard. Michael was just about to get his things out of his schoolbag when he noticed that the boy next to him pushed a note across the table and left him lying in front of Michael.

The teacher did not notice this as he stood with his back to the class and continued to write something on the blackboard. Michael picked up the note and read what was written on it. A slight smile spread across Michael's face. Michael dropped the note in his satchel and concentrated on the lesson.

"My name is Leo," the boy said when the first lesson of the day was over. "I know, that was written on the note you gave me." "And what's your name?" Leo asked. "I'm Michael." "You're new to the city, right? I've never seen you here before. "Michael's annoyance had completely gone by the fact that Leo had addressed Michael. Michael was totally relaxed and barely excited.

"Yes, I moved to town with my parents a few days ago." "It's hard to make friends in a new city. But do not worry. Everyone is really nice in this class. Why did not you come to us at the bus stop? "Leo asked Michael. "I'm a bit shy. Plus, I felt like you made fun of me. "Leo shook his head in denial. "No, I just told a joke. We did not talk about you. "

Now it was embarrassing for Michael that he had not dared to speak to Leo and the other children at the bus stop. "If you like, I like to be your friend," Leo offered. Michael was happy about this offer. "I'd like to be your friend," Michael replied in a joyful voice. "Then this is probably the beginning of a new friendship," Leo announced and the two children happily shook hands.