For three nights, Evelyn has been struggling to find sleep because she's so looking forward to her first vacation, which will start tomorrow morning. Evelyn is eleven years old and has never been on vacation.

Her family does not have much money and has not been able to afford a vacation in recent years, which is why Evelyn usually spent her holidays at home while many of her school friends were on vacation. Evelyn has always wondered what it would be like to spend a holiday on the beach. She often dreamed of spending a day on the beach, but whenever her dreams came to an end, the beautiful feeling Evelyn had felt during her beach vacation dreams had vanished. 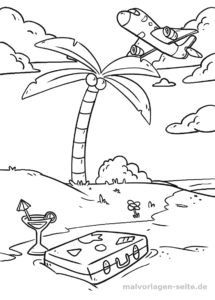 In the last summer holidays, Evelyn's best friend spent a vacation on the beach and when she returned after two weeks, she told Evelyn about all the beautiful things she had on the beach. Evelyn was very jealous of her friend when she talked about her vacation. She also wanted to spend a holiday on a beach.

Evelyn talked to her parents for weeks, until one day they gave in and promised their daughter a holiday, but to keep this promise, Evelyn's parents had to save a lot of money. Both Evelyn's parents pursue jobs they do not make much money with. It took a while for them to get the money together to go on vacation. Evelyn was not aware of this. She was happy when her parents told her that they were going on vacation together.

Evelyn lies in her bed and turns wildly back and forth. She just can not fall asleep, because she is looking forward to the holiday. Constantly she looks at her alarm clock and realizes that it is getting later and later. Meanwhile, the alarm clock already indicates 2 clock in the night. Normally, Evelyn is never awake so long because she is only eleven years old and her parents do not agree that she stays awake for so long.

But Evelyn does not care that she is awake late, for she has been trying to find sleep for hours. Annoyed, she sits up and looks around in her room. "That is impossible. Why can not I fall asleep? "She whispers softly. "It does not help if I sit around here. I just lie down again and try not to think about tomorrow. At some point I will fall asleep already. "Evelyn lies down again and closes her eyes. She tries not to think about the upcoming holiday, but it is difficult, because she is looking forward to the holiday.

"Get up!" Evelyn's mother calls. Evelyn wakes up exhausted from the short night. "Oh man. I'm so tired, "murmurs Evelyn sleepily, but then she realizes that morning has dawned. This means that the holiday on the beach is imminent. "Today begins my first vacation," Evelyn speaks louder than she intended.

She gets up and goes to her suitcase, which she already packed a few days ago with anticipation of the holiday. "I hope I have everything I need." Evelyn considers what else she could take away. Her suitcase is already overcrowded. She had a hard time closing the suitcase because there are so many things in it. Evelyn's mother helped her pack the case, because Evelyn had never packed a suitcase before, so she was a little overwhelmed when it came to stowing her clothes in the suitcase.

Together, they packed everything in their suitcases, which Evelyn could use during their beach vacation. Evelyn would have liked to take a lot more things with her, but there is no room left in the suitcase.

A few hours later Evelyn and her parents are in the hallway. They have provided their luggage and can begin their journey. "Well, are you upset, Evelyn? We'll be leaving soon. "" Yes, I'm excited. How long will it be before we arrive at the beach? "Evelyn asks her father.

"Well, you'll have to wait a bit longer. We're going to the airport first. "" I've never flown, "Evelyn explains. "I know. My last flight has been back a long time, because I have not been on vacation for ages, "the father admits. "I think this holiday will do us all good," says Evelyn's mother. "I think so too," confirms the father. "We have to set off now, otherwise we'll miss our flight." So Evelyn's family is on their way to the airport.

The same evening, Evelyn's family arrives at the hotel, where she will live the next few days. "Now let's bring our bags to our room. Then we can have a look at the hotel, "says Evelyn's father. His wife and daughter agree. Evelyn really enjoyed her first flight with a plane. She thought it was nice to look out the window and look down on the world.

"Wow, that's a nice room." "The best is yet to come, Evelyn. Go out to the balcony, "says Evelyn's father. "Why is that?" Asks Evelyn. "You'll see." The smile on his father's face suggests that Evelyn's face will spread a smile as well. Evelyn opens the door to the balcony.

She goes out and sees the beach, which is very close to the hotel. "There's the beach!" Evelyn shouts happily. Her parents enter the balcony. "Yes, there is the beach. He is not far away. Do you know what we will do tomorrow after breakfast? We go to the beach and spend our day there. What do you say to that? "Asks Evelyn's mother. "That would be great."

The next day Evelyn's family goes to the beach after breakfast. When she arrives, Evelyn is thrilled. "That's how I imagined the beach. It's beautiful. "The family spends the entire day on the beach, and when the day is finally over, Evelyn really enjoys the day.

"We are here for a few more days. That means we can spend a lot of time on the beach, "explains Evelyn's father. "I will enjoy every day of our holiday to the fullest. I'm so happy we're here. "" It was a nice day. I have not felt as relaxed for a long time as I did today. Now we go back to the hotel. There will be dinner soon. I hope you two are hungry. "" Yeah, I'm very hungry, "replies Evelyn. "Then let us go."

"Are we going to the beach again?", Evelyn wants to know about her father. "We'll see. We have plenty of time to think about it. "Evelyn's first vacation did not take long, but Evelyn will forever remember her time on the beach.