The entire crew was ashamed and disconsolate in the locker room. After the 10: 0 defeat in the just ended football game, every player in the team was very depressed. They were not the best football team. They were aware of that. But never before had they lost double digits.

Short story for children - football and the defeat

There was one more thing that was more depressing for the players than the 10 goals. They had not scored a single goal and they had worked so hard. After the poor performance at halftime, all players had again given their best and played good football, but the opponent was simply better that day. 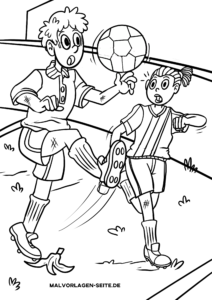 "Guys, we played really bad today. You can not talk that nice. I'm really surprised that we did not lose even higher, "said midfielder Alexander. "You can not say anything against that," replied Max, who also played in midfield. "Nothing worked today. We both played badly too, "Max told his friend Alexander. "Yes, unfortunately I have to agree with you.

I have been playing football for so many years now and have never before made so many bad passes as I do today. That's almost embarrassing. Are we training maybe wrong? "" Okay, I agree with you. We were bad today. Even very bad, "said striker Dominik, who was considered the best player in the team, because there were rarely games in which he scored no goals. Today, such a goalless game took place, in which Dominik just had no luck. Whenever he got the ball at his feet, he stumbled or shot past the goal a few meters.

The opposing goalkeeper did not even have to work hard because there was hardly a shot at his goal. He had the opportunity to spend relaxed 90 minutes. Dominik got up so all his teammates could see him. "We lost a lot today but that does not matter as long as it does not happen again. Everyone has bad days. We clearly had such a bad day today. You can not say otherwise, guys. We all made mistakes today, so we lost 10: 0. Today it was our opponent who was celebrating and rejoicing after the end of the 90.

But we must not be discouraged. Instead, we have to work on our mistakes and avoid them in the next game. The next game we will win again! "This speech inspired the other players. They stood up and looked as if they had regained their courage. Dominik's speech has been effective.

Two weeks had passed since the high defeat. In the meantime, the team had trained a lot. The players had meanwhile discussed the mistakes they had made during the 10: 0 defeat. Today another game took place and nobody wanted to make the same mistakes again. Before the game, the team gathered for a brief meeting.

"Today I will not let the opponent score a goal," said the goalkeeper Johannes, who had to watch ten times in the last game as the ball flew past him and over the goal line. "Today I will hold every ball coming towards me." "We already discussed it, Johannes. The ten goals conceded were not your fault. But if you do a good job today, that would be very good, of course, "said Max." I'll do well today. You will see that. "

"Good. But football is a team sport. We all have to play better today than the last time. "Max looked around and all of his teammates nodded affirmatively. "All right then. Then we go out there and show the fans that we are good footballers. "Motivated, the players went on the field.

The locker door opened. From the good mood of the players, which was still present before the start of the game, nothing seemed to be left over. The players sat down on the benches. Some players looked disappointed on the floor and folded their hands together. Others took a sip of water and put their legs up to rest. Alexander, Max, Dominik and Johannes gathered.

"Who would have thought that. We can actually play even worse. We're already back at 4: 0 at halftime. If we are not careful then we will lose double digits again. I thought you were holding every ball coming towards your goal today, "Max told Johannes. "I ... I do not know what to say." "No one could have taken those shots," Alexander John tried to console. "That does not matter now. We're behind. But if the opposing team manages to score four goals in one half, then we should be able to do that, right? "Dominik asked.

"Well, I'm a goalkeeper. You should not expect any goals from me. "" As long as you do not start shooting into your own goal, everything is fine, "Max said and the four players began to laugh out loud. The other players in the locker room became aware of the laughter. "What's going on?" Asked one of the players. "I have no idea," said another. "Why are you laughing? Just say, you're still in a good mood. "" The opponent has four goals ahead. But what does it matter? We stay on the ball, guys! "

Dominik's words were again effective. The other players were infected by Dominik's good mood. "We'll go out there now and use the remaining 45 minutes to score four goals ourselves. If we make an effort, we even manage to score five goals. Then we could win the game. We can do that, right? "" Yes! "Dominik's teammates shouted.

Laughing, the players came back to the dressing room after the match ended. The team was in a good mood. "I can not believe that you really shot the ball in your own goal," Alexander said to Johannes. "It was not on purpose. I slipped on the grass, kicked the ball, and when my leg swung back, I shot the ball backwards. That can happen, "Johannes replied, but he had to laugh himself.

That had never happened to him. "As you say, Johannes. This action was only surpassed by Dominik's header, or should I say better header attempt. "" Hey! I did not want to mess up my hairstyle. Alright? "Again everybody started to laugh out loud. "How high have we actually lost?", One of the players finally asked. "No idea. It does not matter. I guess even the fans have stopped counting the goals of the opposing team. I even got the impression that the fans had fun. "" Just like us. "" That's it. "" That was a fun day. "" Still, I do not want to relive that. "

The comments of the players whizzed through the locker room. They were just a hobby team that enjoyed football, but that day players had experienced something they would never forget in their lives. Despite losing high again, they were able to enjoy the second half of the match to the fullest. There were many embarrassing situations on the field. The players, however, took this with humor.

"One thing is certain," said Dominik. “We are still a long way from achieving our top performance. But will we give up? "" No. "" Never. "" We don't. "" We don't give up. "Again some players made their comments. "We never give up. But what will we do instead, my friends? ”Asked Dominik. "We stay on the ball!" Shouted all players together and smiled satisfied.

Do you have any questions, suggestions or criticism? Are you looking for a drawing from your photo? Please do not hesitate to contact us.

Please support us. Sharing is fun

We have over 3.500 free coloring pages with child-friendly designs for boys and girls. Accompanied by handicraft templates, child-friendly puzzles, templates for arithmetic exercises, game ideas and for parents with editorial texts about family, partnership and upbringing. The coloring pages are suitable for children from kindergarten to elementary school.