A loud noise broke Manuel from his peaceful sleep. "What was that?" He asked in alarm, though he was the only person in the room. Asleep, he rubbed his tired eyes. "Sounded like thunder," Manuel said, sitting down worried on the edge of his bed.

Manuel was very afraid of thunderstorms, because the loud rumble of thunder and the brightness of the flashes were always a reason for him to be afraid. Manuel walked slowly to the window and pulled the curtains aside to look outside. Manuel could see nothing but darkness. The aquarium, which stood in his room on a small cabinet, was the only source of light that lit up the room. 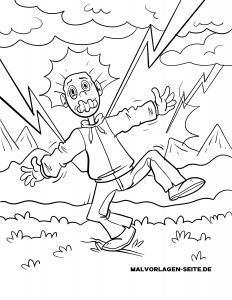 "Maybe I was wrong too. It seems to be very quiet. I can not hear any thunder and I can not see any lightning either. "Manuel closed the curtains again and was about to lie down in bed when another loud thunder sounded. Manuel winced and pulled the covers over his head. He was not wrong.

Manuel got up again and looked out of the window when suddenly a flash of lightning lit the landscape, allowing Manuel to see the whole valley. He stood there petrified and began to tremble slightly. "Just a thunderstorm," he stuttered softly and barely audible.

The next morning, Manuel's alarm rang, but the alarm clock was out of work this morning because Manuel was already awake. He had not closed his eyes all night, because the storm made him unable to sleep.

Manuel was completely exhausted. He did not even have the strength to sit up. Luckily it was weekend, so Manuel did not have to go to school. However, he was used to getting up early on the weekends as well. However, he found it very difficult that day. His body was marked by the sleepless night.

"Stupid storm," Manuel cursed. Manuel could hear raindrops drumming against the window. The thunderstorm had subsided during the night, but it was still raining. Manuel pushed himself to leave the bed. After all, he could not stay in bed the entire day. Manuel went to the kitchen, where he met his mother. "You look so terrible. Did not you sleep well? "His mother asked when she saw Manuel's tired eyes.

"No, not at all. This storm kept me awake all night. I could not sleep. I had ... "Manuel wondered if he should finish the sentence. "What did you have?" His mother asked curiously.

"I was afraid. I admit it. "" Before the storm? "His mother asked. "Yes," Manuel admitted, slightly ashamed. He was a little embarrassed to talk about it. "Why did not you say anything?" "What should I have said?" "Well, you could have talked to me or your dad about it."

"It was the middle of the night. I did not want to wake you. Besides, I said to myself that a thunderstorm is not so bad after all. I then went back to bed, closed my eyes and tried to fall asleep. Unfortunately, I did not manage to fall asleep. Instead, I was awake all night and now I'm really tired. I'd like to go to sleep now. "" Then lie down. You clearly lack sleep. You can see that. "" I think it would not be wrong to sleep again. "

"I agree with that. I can wake you up then, so you do not sleep all day. Your sleeping routine should not get mixed up after all. Go back to your room and sleep a bit. "" Okay. "" Sleep well. "" Thanks. "Following his mother's advice, Manuel went to his bed to catch up on the missed sleep.

The rain did not subside. It was a very rainy day and after a few hours a new thunderstorm started to show. The thunder and lightning returned so Manuel was torn from his sleep. He looks at his alarm clock and realizes that he had found a few hours sleep. But now that lightning and thunder had returned, it was difficult for him to sleep in peace. As it was day, Manuel was not so worried.

At night it would have been harder for him to cope with the storm. By day the fear of the thunderstorm was not so great. Since Manuel could not sleep, he went into the living room. There his mother sat on the sofa. On the table in front of her lay several sheets of paper and various pens.

Manuel's mother liked to paint and she had talent. "Ah, you're awake again. I would have awakened you soon anyway. Did sleep help you? "Asked Manuel's mother. "Yes, he has. I feel better already. But the storm woke me up. I was scared when I heard the loud thunder. "There was a brief silence. "What are you doing?" Manuel finally asked his mother. "I paint a little," the mother replied curtly.

"And what do you paint?" "A landscape." Manuel looked at the picture his mother was painting. "Yes, a landscape. There is also a flash to see. Besides, it's raining. "" Right. I would like to represent a thunderstorm in the picture. What do you think? Has the picture been successful so far? "The mother asked. "I think so," said Manuel, who found the picture really great.

"In the picture, the storm does not look so bad," said Manuel. "The thunder is loud and the lightning is pretty bright, but that's the weather sometimes. At some point, every storm is over. Again, this one, "said Manuel's mother. Manuel looked out the window and was surprised.

The storm was over. The rain had stopped. The first sunbeams crowded through the dark gray clouds and illuminated the landscape. "That's beautiful," Manuel said in surprise. His mother stood next to him. "Yes, it is indeed. If there were no thunderstorms, then we would be denied this beautiful sight. "" Do you paint a picture of this landscape? "Asked Manuel. "I do not know. Should I?"

"Well, absolutely," the boy demanded. "But only if you paint with me." "But I can not paint as well as you." "That does not matter," said his mother. "Then you can use this day to practice something." "Okay, where are the pencils?", Manuel asked and the two sat down on the sofa, from where they had a great view from the window and could look at the landscape.

Manually grabbed the pencils enthusiastically and grabbed a piece of paper to paint the landscape. He had already forgotten the thunderstorm and the sleepless night. He was happy to spend some time with his mother now. Together, they spent the day painting two pictures of beautiful landscapes.

Download the short story "Fear of thunderstorms" as a pdf document

Clicking on the link opens the page with the respective short story:

Do you have comments on the short story? Talk to us.