Three days had passed since Erik's parents had good news for him. "We have a big surprise for you, Erik. But you have to wait a few more days, "his mother told him. Erik could not wait to finally get his surprise. He had been waiting for three long days and he became more and more impatient.

Short story for children - pet as a surprise for Erik

Erik, just 12 years old, was a very sociable child. He was always friendly and helpful. Erik had many friends who always appreciated his good mood. Erik was very popular with his friends and at school. In addition, he was a good student, always showing good grades. Of course, this pleased his parents. 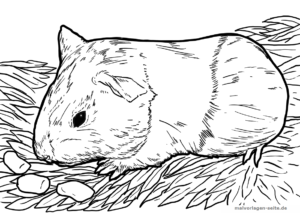 Since Erik was such a good boy, his parents decided to give him something very special, something he had long wanted. Erik had no idea what his parents were up to. He thought a lot about what a surprise it was. His parents made it very exciting, because only four days after the announcement of the surprise, they told their boy at the breakfast table that it was soon time and Erik got his surprise.

"When you come home from school this afternoon, the surprise is waiting in your room. So you can look forward to it, "said Erik's father. Of course, Erik's anticipation quickly increased. "I'm really curious," Erik said, trying not to show his excitement, but his parents sensed that he was looking forward to the surprise that would await him later in the day.

"But now you go to school," said Erik's father. "I'll do that," Erik answered. He picked up his school backpack and made his way to school.

During class, Erik tried to suppress the anticipation of his surprise in order to focus fully on the lesson. Of course, he found it hard to concentrate, because he could not prevent himself from now and then thinking about the surprise. Some lessons passed, but Erik had to wait for the physical education before he could go home. Luckily, sport was one of Erik's favorite subjects.

He was looking forward to the two sports lessons every week, because Erik was a sporty boy. After various exercises, the sports teacher announced that the class should split into two groups to play a round of football. Erik was happy about that because football was by far his favorite sport. He has always been a good footballer, but driven by the anticipation of the surprise, he showed a particularly good performance during the football game in physical education, which also attracted his teacher's attention.

The teacher praised Erik after class for his performance. That was a great confirmation for Erik. When the physical education ended, Erik went into the locker room, where he was approached by his best friend. "Do you feel like coming to me today? We could go out and play some football. "Normally Erik would have liked to go to his friend to play football with him, but the surprise that Erik expected at home was more tempting for him. "Unfortunately I can not.

My parents have a surprise for me and I should get them today, "Erik told his friend. "Oh, and what's that surprise?" Erik's friend asked. "Unfortunately I do not know it. But I'm really looking forward to it. As soon as I change clothes, I will go home immediately. I can not wait to get home. "" I'd like to be there when you get the surprise from your parents. "" Well, then just come with me, "Erik said. "I can not. I have to go home first. Otherwise, my parents will worry, "said Erik's friend.

"I understand. Well, I'll let you know immediately, if I know what the surprise is. Okay? "Erik's friend nodded. It was not long before Erik changed. When he was done, he picked up his school backpack and immediately headed home. His parents were already waiting for him, because they wanted to have a little fun with their son.

"He should come any moment. Did you prepare everything? "Asked Erik's mother. "Yes, I took care of everything. Erik will be wide-eyed when he enters his room. I'm curious how he'll react to the surprise. He certainly does not expect that. Can you already see him? "Erik's father asked.

"Yes, here he comes. Come on, let's sit on the sofa. "" That's a good idea. We pretend we forgot the surprise. It's going to be funny. "When Erik walked in the door, his parents were sitting on the sofa. Erik stood in front of his parents and looked at her skeptically. "Do you want to fool me?" His parents smiled. "We are sorry. We did not want to miss the fun. "" Yes, all right. Where is my surprise? I'm looking forward to it all day. "

"You want to have your surprise?" Erik's father asked amused. "Yes, please," Erik replied. By now he had become very impatient. "If you want your surprise, you should take a look in your room. I think there is something for you. "Erik hurried to his room and opened the door. In the middle of the room was the surprise that was meant for Erik.

Erik stood in his room without emotion. He could hardly believe it. There was a cage for rodents in his room, and there were two little guinea pigs in it. Erik's parents appeared behind him. "Well, what's going on? Do not you want to get closer? After all, these are your two guinea pigs, "said Erik's mother. Erik turned and hugged his parents because he was pleased that he now had two guinea pigs of his own.

He had long dreamed of having his own guinea pigs, because these were his absolute favorite animals. Often he visited a classmate, as he had three guinea pigs and Erik then gladly took the time to observe the animals and to pet them. "These are really my guinea pigs?", Asked Erik slightly disbelieving. "Yes, these are your guinea pigs now. They are two females. Do you have any idea what you like to call them? "Asked Erik's father.

"No, I have to think about that," explained Erik. "Well, that does not matter. You do not have to give them a name right away. There's still time. "" Exactly, "confirmed Erik's mother. "Thank you very much for this great surprise." "You're welcome," said Erik's mother and father at the same time. "But keep in mind that pets are associated with a lot of responsibility. The two guinea pigs need daily fresh water and of course food. You're also responsible for cleaning her cage. After all, these are not toys, but pets. "

"I know," Erik answered. I'll take good care of them. "" We know that. Now we'll leave you alone with your two guinea pigs. Then you have the opportunity to get to know each other a bit better. "With these words, Erik's parents left the room. Erik sat down on the floor next to the cage. The two little guinea pigs looked curiously through the bars. "Hello you two. My name is Erik. You two are very cute. I do not have any names for you, but they'll come to mind. "

When it was time for dinner, Erik came out of his room and went to the dining room, where his parents were already sitting at the table. The food was already on the table. It smelled tempting and Erik was very hungry. "Did you make friends?", Erik's father wanted to know. "No, the guinea pigs are boring. I am no longer interested in the animals. "

Erik's parents were shocked, but suddenly Erik started to laugh out loud. "It was just fun." His parents looked relieved. "Do not scare us like that!" "I would like to thank you again. That was a really great surprise. "