This is the story of the green teddy bear who once made a little girl named Lilly very happy. On the day Lilly got the teddy bear from her parents, the girl was very happy. It was an unusual teddy bear because its fur was green.

Despite this unusual coat color, Lilly loved her teddy bear very much. She took him everywhere and proudly showed her teddy to everyone who met her. But why did Lilly like her green teddy bear so much? Well, it was because the two of them had experienced a lot together over time. 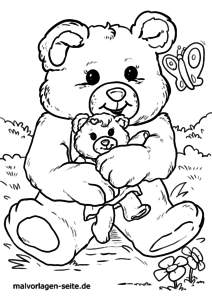 One night Lilly heard a strange noise and woke up from her sleep. She was very scared, because in her room it was completely dark. She tried to recognize something, but she saw only vague outlines. Lilly felt something or someone was in her room. Her teddy bear was lying next to her in her bed.

Lilly took the Teddy in her arms and hugged him to her. The teddy bear gave Lilly a sense of security. All of a sudden she was not afraid anymore and did not even think about the sound she had heard. She thought only of her teddy bear with the green fur. Lilly felt Teddy was protecting her, so she fell asleep within minutes.

Another time Lilly was waiting for the school bus. It started to rain and Lilly got wet as she could not stand anywhere to protect herself from the rain. Lilly had her teddy bear with her because she wanted to show it to her friends at school. Also, the teddy bear got wet and Lilly had to laugh, because the Teddy's fur absorbed the raindrops and looked very funny. Lilly had to laugh loudly and so passed the time until the school bus came, very quickly. On the bus, Lilly finally found shelter from the rain with her teddy bear. She put the teddy on the place next to her and looked happy, because now the two were not wet anymore.

Lilly had never wondered why her teddy's coat was green. She liked her teddy bear the way he was. He was her friend and there were only a few moments when the two were separated. But there was a morning Lilly was reluctant to remember, for he is associated with a sad story.

It was the day Lilly's teddy bear disappeared.

Lilly could not explain what had happened. Her teddy bear had disappeared without a trace. She knew full well that she had put her bear in the bed next to her, but when she awoke in the morning, the teddy was gone. He was gone and Lilly did not know what to do next. She explained to her mother what had happened. Together, they searched for Lilly's green teddy bear throughout the apartment. They searched the large living room, the kitchen and the bathroom.

However, they could not find the teddy anywhere. Lilly was very worried because she had loved her bear. After the two searched the entire apartment, Lilly's mother finally gave up and offered to buy her a new teddy bear. But Lilly did not want a new bear. She just wanted her teddy bear with the green fur. Lilly was desperate and sad at the same time.

Three days passed and Lilly's teddy bear did not reappear. He stayed away and that was what made Lilly very sad. She remembered all the things they had experienced together. But this time seemed to be over now. Lilly continued to refuse every new teddy bear. Her mother would have liked to buy her a new bear, but little Lilly did not want that.

The teddy bear with the green coat was something special for her. Once, Lilly remembered that very day, she held her bear to a wall in the living room, painted green. Her bear was barely recognizable as its coat had the same shade of green as the wall. Lilly took great pleasure in doing all sorts of things to her teddy.

But since the disappearance of her bear Lilly retired and spent time alone in her room. She did not even want to see her friends from school. Lilly wondered if she would ever see her teddy bear again. Her hope waned, because by now three days had passed and her bear had not reappeared yet.

On the fourth day after the disappearance of Lilly's teddy bear, little Lilly was sitting on the floor in her room, remembering the time with her stuffed animal. Suddenly she saw something under her bed. Lilly could not believe her eyes. Could it be?

Lilly crawled slowly under the bed and there she saw her teddy bear with the green fur. Lilly had found her stuffed animal again. "Mom!" Lilly called loudly. "I found him!" Lilly's mother came into the room and watched her daughter come crawling out from under the bed. "Who do you have?", The mother asked in surprise, because she had not expected that the bear would show up again.

"I found my teddy bear," Lilly said, holding the bear proudly in her arms. Lilly's mother smiled. "Well, that's great. Was he under your bed or what did you have to do down there? "Lilly's mother asked. "Yes, he was under my bed," Lilly confirmed. "He probably fell down and somehow got under the bed," Lilly's mother suggested. "The main thing is that you found him again. Now you can play together again. That's great, is not it? "" Yeah, that's great, "Lilly announced happily. "Finally I have you again. I really missed you a lot. "

After two weeks, the time when Lilly and her bear were separated was almost forgotten. In the 14 days, the two had experienced many things together again. It was a wonderful time for Lilly. She enjoyed the company of her bear, and her parents were happy to see Lilly smile again. The return of her teddy bear had made Lilly very happy. However, she had never actually been separated from her teddy.

He was always near her all the time, lying under the bed. During the time she missed her teddy, Lilly had a desire to find her bear one day. This had happened now. Lilly and her bear had found each other again.

On the green wall in the living room now hung a picture on which Lilly was seen together with her teddy bear. Lilly had painted the picture herself. She painted it the day she found her bear. Lilly's mother suggested hanging the picture on the green wall in the living room. The picture was decorated with many hearts, which made it clear how much Lilly missed her bear when he disappeared. She promised her green teddy bear that she would never lose him again.

Years and years passed. Lilly grew up and became a young woman. Even if she has not played with her teddy bear for a long time, she always kept her promise. She placed her bear on a shelf so that it was easy to see for every visitor. Lilly did not even think about leaving her bear because he was an important part of her childhood.

The picture she once painted was in a fancy picture frame, which was placed next to the teddy bear with the green coat. One day, when Lilly came home from a stressful working day, she sat exhausted on her sofa. Then she saw her teddy bear. She got up and went to the shelf where the bear was. "It's been a long time, but I still love you," Lilly said, smiling.