"Why do all wind turbines have three and not four blades? Or five? "My daughter asks, as we visit my parents in the north.

Mom, why do windmills have three leaves?

This is where the new energy providers romp about, so I'm not surprised about my daughter's question. Luckily, my husband knows his way around. 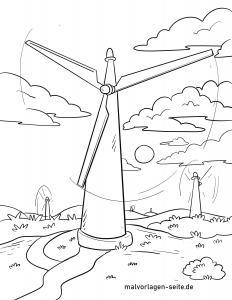 He explains why a wind turbine needs three rotor blades. First of all, that is a consideration of efficiency. The energy yield naturally increases with each additional leaf. Two leaves are worse than three, but four better than three.

However, the jump from two to three in energy gained is greater than the jump from three to four. That is why they have agreed on three leaves, or rather rotor blades.

But there are other reasons why wind turbines have three blades.

Every single sheet costs a lot of money. That's why wind turbines have only three blades and not four. Because the energy gained from a fourth leaf does not cover the cost of a single rotor blade. That is loosely at several hundred thousand euros.

With a whole wind farm, this is very fast in the millions. Why wind turbines have only three wheels, but is also because a four-bladed wind turbine was not as good as a three-bladed. With an odd number of blades, the bending forces do not act so irregularly on the axle and wind turbine.

There is never a sheet at the top, while one is at the bottom. Because this position is unfavorable, since the upper leaf has to endure a lot of wind, while down almost no force acts. Why wind turbines have three blades, so based on this knowledge seems almost logical.