"Mama, why do we actually have an Advent wreath?" - "Yes, I always wanted to know that," I answer.

Why do we actually have an Advent wreath?

"All I know is that Advent is actually coming and the light is of course for hope." 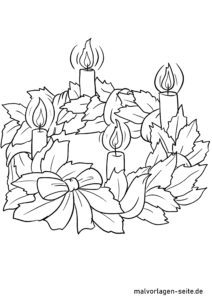 I'm smart and can tell my daughter soon, what's up with the braided fir-tree wreath and the four candles - and of course, why we have an Advent wreath.

The first Advent wreath in history was that of Johann Hinrich Wichern. He lived from 1808 to 1881. He took care of some poor children and moved with them into an old farmhouse.

As the kids kept asking him about Christmas, he made 1839 out of an old cartwheel and made a wooden wreath with twenty small red and four large white candles. "But why do we still have an Advent wreath today?" Insists my daughter on her question. "Hm, maybe because the kids are just as impatient today as they used to be?"

The question of why we still have an Advent wreath today, I can not answer with certainty. It is clear, however, that this Protestant tradition, which it became fast, was also adopted by the Catholics. So she continued year after year.

I still tell my daughter about the symbolism of the wreath. Some say that fir green is generally green and hope is the circular form for life itself. And the candles, of course, are the light and hope born of Jesus' birth.

"And why do you buy an Advent wreath every year just because everyone does it and because of this saving?" My daughter asks, frowning. I wonder how much she already understands about symbols, then I just say. "Because it's a beautiful tradition." That's what makes her happy for the time being!