Where does lightning and thunder come from? A typical child's question every mum or dad has to answer in the course of parenting.

Where does lightning and thunder come from? 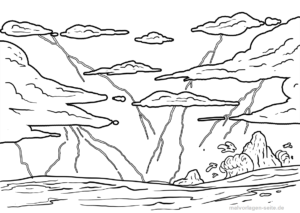 Lightning and thunder are typical side effects of a thunderstorm. I often pray that phrase down like a litany to reassure my daughter, who regularly experiences panic when there are thunderstorms in the summer.

But where does lightning and thunder come from? for real? Lightning is basically nothing more than electrical discharges. The thunder consists of sound waves and is the acoustic discharge of lightning. You almost hear the lightning, the discharge, as a thunderbolt.

In summer, the sun heats the humid air near the ground. Warm air bubbles rise up as they are lighter and then land in colder surroundings somewhere in the sky.

This charge separation (cold / warm) builds up electrical voltage, which, when it becomes too strong, in a flash with timpani and trumpets - thunder! - unloads. Where does lightning and thunder come from? So this would be clarified. They are caused by tensions at high altitudes.

Incidentally, this electric charge easily reaches one billion volts. If a flash discharges, temperatures of up to 30,000 degrees can occur. This in turn heats the air, which expands extremely quickly and then generates the sound waves.

When asked: Where lightning and thunder come fromSo one has to say that both are phenomena of pent-up and discharging tension in the sky.